One of the most treasured arts of the custom automotive culture is the art of lowriding. Throughout its early days, lowriding has always been thought of involving cars, mostly Impalas, with hydraulics or just weight in the trunk. They had spokes, Cragars, or O.G. (original) wheels. Trucks were considered useful only for towing, hauling, or just general farm and maintenance work, but a small segment of America had other plans.

Beginning on the west coast and spreading across the nation was lowrider culture. It had gone from the streets of East Los Angeles to the suburbs of St. Louis and small local communities as well such as Wellington, Texas. Wellington is the home of Ricky Granadoz, Sr. and Jr. Both longtime fans of the lowrider culture and deeply entrenched in the lifestyle.

The elder Granadoz bought the 1952 Chevy Pickup truck over 20 years ago, but in recent years began the process of customization to the level it sits now. With his eyes set on the end goal, the first step was to do the front-end conversion, swapping the front suspension with a 1977 Chevy Nova. In the process, the decision was also made by Ricky Sr. to swap the engine, transmission, and rear-end off of the Nova as well. He undertook the task himself to ensure his personal satisfaction and quality levels were achieved.

While focused on the rear-end swap, Ricky Sr. also decided to incorporate an air-ride suspension setup, complete with dual Viair compressors. and a four-link setup for guaranteed stability, welded by Willy Olvera. While wanting a specific shade of red and flawless prep work, Ricky Sr. and Jr. decided to undertake the task themselves. They began the painstaking process of stripping the entire truck down to bare metal. At this point, they patched, replaced, and/or repaired the rusted out sections of the body. They both tackled all of the bodywork, but when it came down to the paint, it was Ricky Jr’s time to shine, figuratively and literally. He opted for a House of Color brandywine kandy over an Orion silver base. The final touches to accent the paint were done via pinstripe courtesy of Brandon McCoy of Gooch Customs in Oklahoma. New glass all the way around by AAA Glass in Shamrock, Texas as well as new rubber, chrome bumpers, grille, and LED headlights. The custom camel complexion interior was completed on the split-back bench seat and door panels, both with a mild ruffle, as well as the roof and carpet; all by the late David Villarreal out of Childress, Texas. The Granadoz Team didn’t cut any corners on the drivetrain either; incorporating a chromed out small block 350 with a 350 transmission, disc brakes, new gauges, and custom engraving on the valve covers and air breather.

Next, Ricky Sr. added a set of 14” 72 spoke Zenith Wire Wheels with a chrome dish and brandywine spoke and lips. The custom bed was cut, stained, and varnished out of pine by Ricky Sr. with custom 357 revolver wheels in the bed pockets, with LED lights in the undercarriage. As an Illegal Toys Car Club member since 2013, and the only one from Texas, Ricky Granadoz Sr. would like to thank them for their support. But most importantly, Ricky Sr. would like to thank his son, Ricky Jr., for the paint job and additional assistance. This wouldn’t be possible without him. And also shoutout to all Illegal Toys C.C. members in Oklahoma for their many words of encouragement, fun times, and years of competition ahead… 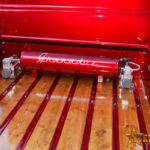 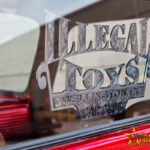 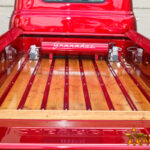 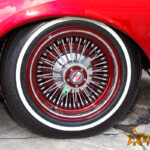 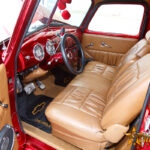 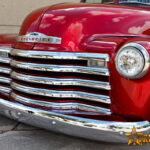 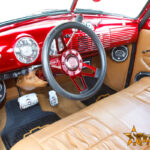 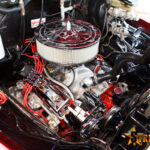 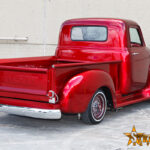 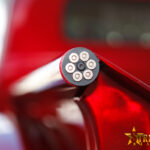 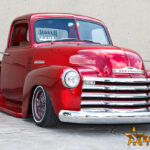 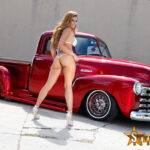 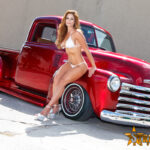 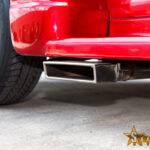 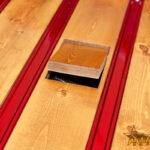